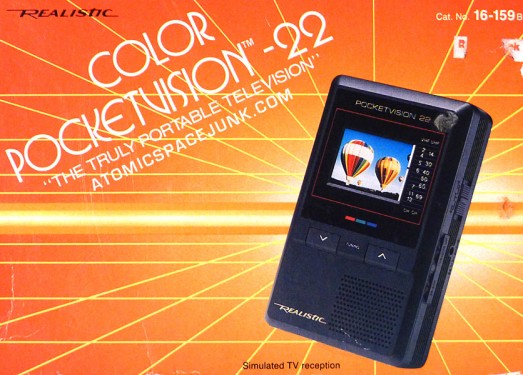 1982 Sony Watchman FD-210
The Sony FD-210 was one of the first portable pocket televisions. It featured a flat ray tube to display the picture. The device weighed about 650 grams and was 87x198x33 CMs in size. The device first sold in Japan and then America two years later. The Sony Watchman brought the portable TV into the limelight of the consumer. 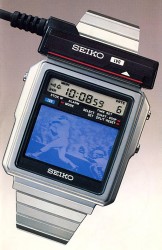 1982 Seiko TV Watch  DXA002
Featured in the 1983 film, Octopussy with Roger Moore! In order to work the watch actually had to be connected to a receiver box that was about the size of a small portable radio. It was debuted in Tokyo in 1982 at the height of the era of 1980s Japanese electronics. It was sold in the US beginning in 1983, but it’s practicality was limited due to requiring the cumbersome receiver box.

1983 Sinclair pocket tv ftv1
The Sinclair FTV1 was in development for years. It used a flat ray tube as a display like the Sony Watchman. The Sinclair innovated further by including a full 625 line and 525 line dual standards display. The model also included a Fresnel lens on top of the display to make it appear larger than it really was. The device measured at 5.5×3.5×1.75 inches. Ultimately, the Sinclair flopped horribly.

1984 Epson et10
The Epson ET-20, also known as the Epson Elf in America, was one of the first television to utilize an LCD panel, much like today’s televisions. The display was 2 inches in size. The device weighed 450g and measured 16 x 8 x 3.1 CMs in size. The Elf could be powered from 5 AA batteries or an optional AC adapter. The LCD panel was pioneered by Casio, being developed in parallel to Sinclair’s technology, but the Epson Elf brought the technology to the public’s attention. 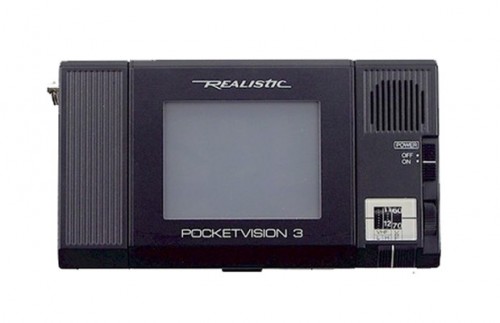 1985 Realistic Pocket Vision 3
Originally offered by Citizen, the PocketVision 3 was rebranded under the Realistic brand and sold through Radio Shack. The PocketVision 3 took the LCD panel one step further. Though, the device was only a black and white set, it could sustain an astounding 10 hours of viewing time from four AAA batteries. The PocketVIsion 3 was able to pull off this feat by not including a backlight. Instead, the display flipped up and allowed natural light to do the job for it. The display was viewed through a mirror on the bottom of the set.

Many more sets were released during the 1908’s decade. Sony continued to expand on its Watchman lineup, later introducing more sets with LCD panels. Casio released a number of pocket-size models that would continually improve on LCD technologies. Seiko also released a number of sets that would commoditize pocket televisions and make them more affordable for consumers. Citizen, or Realistic, continued to expand their line of pocket televisions and slowly make larger and clearer displays.